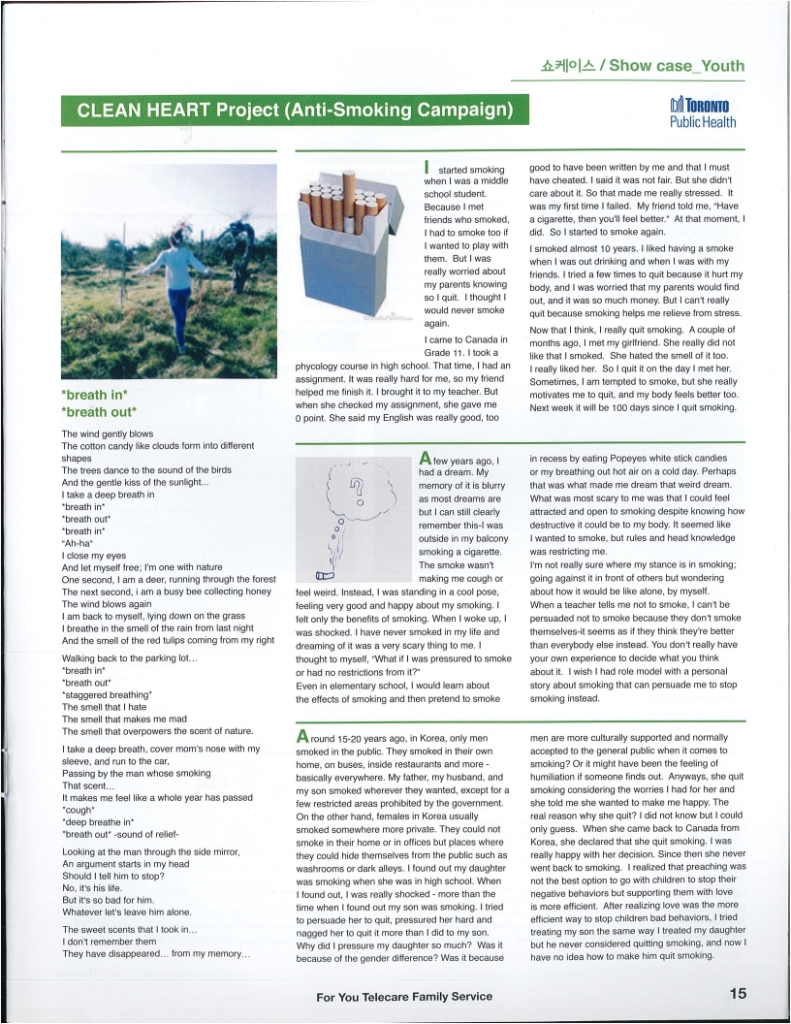 ‘breath in*
‘breath out*
The wind gently blows
The cotton candy like clouds form into different
shapes
The trees dance to the sound of the birds
And the gentle kiss of the sunlight...
I take a deep breath in
*breath in*
‘breath out*
‘breath in*
“Ah-ha"
I close my eyes
And let myself free; I'm one with nature
One second, I am a deer, running through the forest
The next second, i am a busy bee collecting honey
The wind blows again
I am back to myself, lying down on the grass
I breathe in the smell of the rain from last night
And the smell of the red tulips coming from my right
Walking back to the parking lot...
‘breath in*
‘breath out*
‘staggered breathing*
The smell that I hate
The smell that makes me mad
The smell that overpowers the scent of nature.
I take a deep breath, cover mom’s nose with my
sleeve, and run to the car,
Passing by the man whose smoking
That scent...
It makes me feel like a whole year has passed
‘cough*
‘deep breathe in*
‘breath out*
-sound of reliefLooking at the man through the side mirror,
An argument starts in my head
Should I tell him to stop?
No, it’s his life.
But it’s so bad for him.
Whatever let’s leave him alone.
The sweet scents that I took in...
I don’t remember them
They have disappeared... from my memory...


I started smoking when I was a middle school student. Because I met friends who smoked, I had to smoke too if I wanted to play with them. But I was really worried about my parents knowing so I quit. I thought I would never smoke again. I came to Canada in Grade 11.1 took a phycology course in high school. That time, I had an assignment. It was really hard for me, so my friend helped me finish it. I brought it to my teacher. But when she checked my assignment, she gave me 0 point. She said my English was really good, too good to have been written by me and that I must have cheated. I said it was not fair. But she didn’t care about it. So that made me really stressed. It was my first time I failed. My friend told me, “Have a cigarette, then you'll feel better.” At that moment, I did. So I started to smoke again. I smoked almost 10 years. I liked having a smoke when I was out drinking and when I was with my friends. I tried a few times to quit because it hurt my body, and I was worried that my parents would find out, and it was so much money. But I can’t really quit because smoking helps me relieve from stress. Now that I think, I really quit smoking. A couple of months ago, I met my girlfriend. She really did not like that I smoked. She hated the smell of it too. I really liked her. So I quit it on the day I met her. Sometimes, I am tempted to smoke, but she really motivates me to quit, and my body feels better too. Next week it will be 100 days since I quit smoking.


A few years ago, I had a dream. My memory of it is blurry as most dreams are but I can still clearly remember this-l was outside in my balcony smoking a cigarette. The smoke wasn't feel weird. Instead, I was standing in a cool pose, feeling very good and happy about my smoking. I felt only the benefits of smoking. When I woke up, I was shocked. I have never smoked in my life and dreaming of it was a very scary thing to me. I thought to myself, ’’What if I was pressured to smoke or had no restrictions from it?” Even in elementary school, I would learn about the effects of smoking and then pretend to smoke in recess by eating Popeyes white stick candies or my breathing out hot air on a cold day. Perhaps that was what made me dream that weird dream. What was most scary to me was that I could feel attracted and open to smoking despite knowing how destructive it could be to my body. It seemed like I wanted to smoke, but rules and head knowledge was restricting me. I’m not really sure where my stance is in smoking; going against it in front of others but wondering about how it would be like alone, by myself. When a teacher tells me not to smoke, I can’t be persuaded not to smoke because they don’t smoke themselves-it seems as if they think they're better than everybody else instead. You don’t really have your own experience to decide what you think about it. I wish I had role model with a personal story about smoking that can persuade me to stop smoking instead.


Around 15-20 years ago, in Korea, only men smoked in the public. They smoked in their own home, on buses, inside restaurants and more - basically everywhere. My father, my husband, and my son smoked wherever they wanted, except for a few restricted areas prohibited by the government. On the other hand, females in Korea usually smoked somewhere more private. They could not smoke in their home or in offices but places where they could hide themselves from the public such as washrooms or dark alleys. I found out my daughter was smoking when she was in high school. When I found out, I was really shocked - more than the time when I found out my son was smoking. I tried to persuade her to quit, pressured her hard and nagged her to quit it more than I did to my son. Why did I pressure my daughter so much? Was it because of the gender difference? Was it because men are more culturally supported and normally accepted to the general public when it comes to smoking? Or it might have been the feeling of humiliation if someone finds out. Anyways, she quit smoking considering the worries I had for her and she told me she wanted to make me happy. The real reason why she quit? I did not know but I could only guess. When she came back to Canada from Korea, she declared that she quit smoking. I was really happy with her decision. Since then she never went back to smoking. I realized that preaching was not the best option to go with children to stop their negative behaviors but supporting them with love is more efficient. After realizing love was the more efficient way to stop children bad behaviors, I tried treating my son the same way I treated my daughter but he never considered quitting smoking, and now I have no idea how to make him quit smoking. 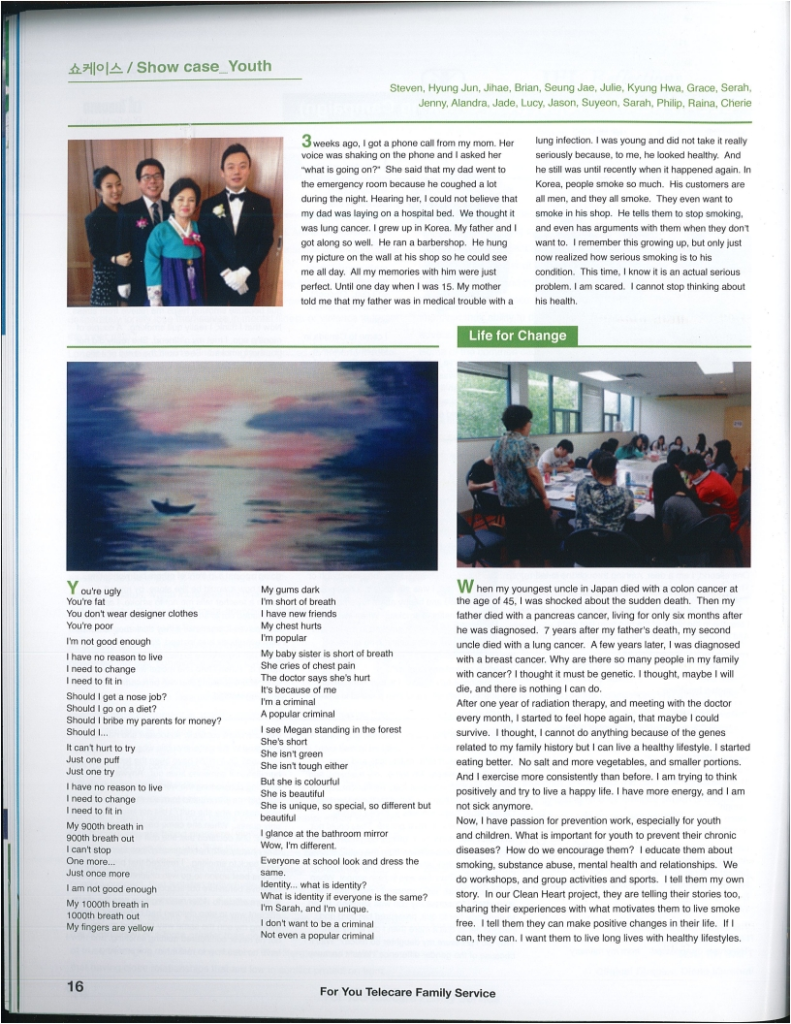 3 weeks voice was ago, I got a phone call from my mom. Her shaking on the phone and I asked her “what is going on?” She said that my dad went to the emergency room because he coughed a lot during the night. Hearing her, I could not believe that my dad was laying on a hospital bed. We thought it was lung cancer. I grew up in Korea. My father and I got along so well. He ran a barbershop. He hung my picture on the wall at his shop so he could see me all day. All my memories with him were just perfect. Until one day when I was 15. My mother told me that my father was in medical trouble with a lung infection. I was young and did not take it really seriously because, to me, he looked healthy. And he still was until recently when it happened again. In Korea, people smoke so much. His customers are all men, and they all smoke. They even want to smoke in his shop. He tells them to stop smoking, and even has arguments with them when they don’t want to. I remember this growing up, but only just now realized how serious smoking is to his condition. This time, I know it is an actual serious problem. I am scared. I cannot stop thinking about his health.

My gums dark
I'm short of breath
I have new friends
My chest hurts
I'm popular
My baby sister is short of breath
She cries of chest pain
The doctor says she's hurt
It’s because of me
I'm a criminal
A popular criminal
I see Megan standing in the forest
She's short
She isn’t green
She isn't tough either
But she is colourful
She is beautiful
She is unique, so special, so different but
beautiful
I glance at the bathroom mirror
Wow, I'm different.
Everyone at school look and dress the
same.
Identity... what is identity?
What is identity if everyone is the same?
I'm Sarah, and I'm unique.
I don't want to be a criminal
Not even a popular criminal

When my youngest uncle in Japan died with a colon cancer at the age of 45, I was shocked about the sudden death. Then my father died with a pancreas cancer, living for only six months after he was diagnosed. 7 years after my father’s death, my second uncle died with a lung cancer. A few years later, I was diagnosed with a breast cancer. Why are there so many people in my family with cancer? I thought it must be genetic. I thought, maybe I will die, and there is nothing I can do. After one year of radiation therapy, and meeting with the doctor every month, I started to feel hope again, that maybe I could survive. I thought, I cannot do anything because of the genes related to my family history but I can live a healthy lifestyle. I started eating better. No salt and more vegetables, and smaller portions. And I exercise more consistently than before. I am trying to think positively and try to live a happy life. I have more energy, and I am not sick anymore. Now, I have passion for prevention work, especially for youth and children. What is important for youth to prevent their chronic diseases? How do we encourage them? I educate them about smoking, substance abuse, mental health and relationships. We do workshops, and group activities and sports. I tell them my own story. In our Clean Heart project, they are telling their stories too, sharing their experiences with what motivates them to live smoke free. I tell them they can make positive changes in their life. If I can, they can. I want them to live long lives with healthy lifestyles.
Total Reply 0
You must be logged in to post a comment.
« Family Funday (October 2021)
The ENE Project: Expressive Art Workshop through Computer Animation (March 29th ~ May 17th 2022) »
List
Powered by KBoard